Ok, so it’s the last day of 2013 but Twelfth Night isn’t here yet so I can still get in my other Christmassy book. It was the first of the Narnia Chronicles I came across as a child, therefore the right place to start my re-reading. The young man behind the counter in the Age Concern shop where I bought it recited their proper sequence to me in a solemn voice – clearly a fan. But blow the recommended reading order suggested by C. S. Lewis! The Lion, The Witch & The Wardrobe was the first he wrote. It was published in 1950, and The Magician’s Nephew (the creation story of Narnia) didn’t appear until almost last.

This book was read out loud by my class teacher in junior school, in the precious 15 minutes at the end of every school day when we could just sit and listen to a story.* I must have sought it out afterwards to relish by myself. The copy I read then had this joyful cover art by Pauline Baynes, whereas my current one – still with the evocative Baynes illustrations inside – has a very different feel on its cover (by Julek Heller).

I was surprised to find that what I remember as an epic is quite short, just 200 small pages with plenty of pictures. It’s fast-paced and the tension keeps up. After a quick and absolutely classic set-up – parents ditched (actually they don’t even get a mention, the children are just sent away from London ‘because of the air-raids’), despatched to rambling country house, adult supervision largely removed – Chapters 2 and 3 contain the stand-out scenes which cement this story in my mind: Lucy’s encounter with Mr Tumnus and Edmund’s with the White Witch. The good/evil dichotomy is convincingly established. And we’re introduced to the icons of LWW: the snow, the lamppost, the Turkish Delight. I’m convinced that at least half my love of Turkish Delight springs from this scene. It’s shown as the ultimate desirable food, and yes, it did used to come at Christmas in a round box, tied with ribbon, and there was never enough. I don’t think chocolate or toffee would have worked nearly so well.

Another surprise is that Mr Tumnus, so fondly remembered as a major player, has a very small part in the action. After Chapter 2, he doesn’t appear again until he’s discovered, turned to stone, in the Witch’s palace, and then doesn’t do much at all.

In fact, quite a few aspects of the book were thinner than I remember. This is a beloved classic of children’s literature, but it’s not perfect. I don’t think I ever felt Lewis created very interesting characters, but as an adult reader this was really noticeable. Edmund is the only one with any complexity, if you can call it that, and only because he’s not straightforwardly nice. Early on we learn that he is ‘spiteful’ and prone to telling lies. Poor kid, he’s already gone over to the dark side before the Witch begins her work!

But somehow Lewis makes his actors memorable – animals more often than humans – without giving them much substance. Although it’s Lucy’s story – she is the good, active force that starts it off – she and Susan are soon pushed into very conventional girl roles: caring, loving, healing (Lucy’s bottle), calling for assistance (Susan’s hunting horn), and definitely not fighting. ‘Battles are ugly when women fight,’ says Father Christmas, handing Peter his sword and shield. As if they’re not ugly when men do. Lewis was a young soldier in the First World War; surely he must have known this?

He dwells only briefly on the fighting, unlike the film version where the final battle goes on at length with all the usual CGI thwacks and grunts and even more ‘protect the girls’ business than in the book. I had to turn back a page to check the Witch’s fate, as Lewis almost skips over this momentous event. The grisliest scenes concern the Witch and her mob taunting Aslan at the Stone Table and are really harrowing.

Peter is assigned the traditional role of the oldest brother: sensible, responsible, and required to be brave. At least he’s allowed to admit he doesn’t feel brave. It’s all very conventional, as if Lewis doesn’t want to give the four children much thought, or simply wants them to represent clear good/bad roles. There is a very strange passage – all stiff upper lip and ‘don’t mention the war’ – when Aslan has a talk with the repentant Edmund which we’re not allowed to overhear but ‘which Edmund never forgot’. If it’s that blinking memorable, why can’t we benefit from it too? I demanded petulantly. Then Edmund shakes hands with his siblings and Aslan instructs them, ‘There is no need to talk to him about what is past.’ And they don’t. I expect as a child I saw this as a fair-enough response to an awkward situation, but at this distance it just feels really constrained and emotionally illiterate. But we are in the 21st century now!

The children’s speech is strikingly banal, too, and of its time, apart from the olde-worlde-speak they develop at the end because that’s how princes and princesses must talk! (If this is a joke, it goes on a bit.) I did wonder if I’m just used to much quirkier, smart-mouthed characters in modern children’s fiction, but then Oswald Bastable, William Brown, Dido Twite, and even for younger readers Pooh Bear, have a joyous command of language and their speech tells us a lot about the inner workings of their minds. There is some gentle humour in LWW but it tends to come from the non-human characters.

So what remained of the book I loved as a child, and read at least twice? The wonderful fairytale feel of a land where it’s ‘always winter but never Christmas’. The thrill of the thaw when it comes, along with the tinkling bells on Father Christmas’s sleigh. Deep magic and deeper magic are pretty persuasive. Aslan remains impressive, and, although it struck me as an odd mix of borrowings – and the internal logic not quite sound – I found the mash-up of characters from European folktale, Greek myth, Victorian Christmas, and jolly British wildlife endearing. But most satisfying was still the idea that by hiding in a wardrobe you might accidentally find yourself in another world: that really grabs the imagination. After all, it could happen to anyone, couldn’t it?

* Maybe ‘reading for pleasure’ wouldn’t be such an alien concept if the school curriculum allowed this unheard-of luxury to all primary school children, every day. It was a much-needed wind-down time, let teachers share their favourite books without any demonstrable learning required, and turned us on to new stories. Or let us just daydream, which is no bad thing. 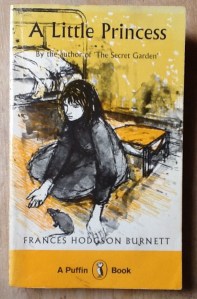 A Little Princess by Frances Hodgson Burnett. First published in 1905.

I think I was ten or eleven years old when I first read this book. Recently, when I wanted to re-read it, I was delighted to find this old Puffin paperback copy with the wonderful spiky, smudgy illustrations by Margery Gill that I remembered from first time around. They seem to fit perfectly with the story. That may be because pictures and story fused together in my imagination on first encountering both; or just because that is what the best kind of illustration does – enters into the essence of the story and embodies it.

Sara Crewe, the princess of the title, is an ‘odd-looking little girl’, reserved and quaint. Thin, with short black hair and green eyes, she thinks – mistakenly, yet without much angst – that she is ugly. Sara knows that beautiful girls are the ones with ‘dimples, and rose-coloured cheeks, and long hair the colour of gold.’ She reminds me of another of Hodgson Burnett’s creations, Mary Lennox in The Secret Garden. Like Sara, Mary was born in India; she is thin, sallow, and ‘everybody said she was the most disagreeable-looking child ever seen’.

Our heroine is not at all princessy, then, in the way we think of it now. And Margery Gill’s pictures convey Sara brilliantly: her awkwardness and her appeal, her nature which is both stoical and optimistic – and stubborn! When Sara’s circumstances suffer a dramatic change the illustrations pull no punches. Gill’s scratchy style is well-suited to grim and grimy surroundings, to haunted and hungry faces.

Margery Gill died in 2008. In a Guardian obituary, Mathew Weaver, who knew her, wrote, ‘By the 1960s…her sometimes solemn drawings of children underlined a new attitude to the young. Children were no longer to be talked down to, but taken seriously.’

Gill’s illustrations for A Little Princess are still available in a recent Puffin Classic. There are various other editions of this book about, many with covers which don’t do Sara and the story justice. One shows three snub-nosed, well-fed, well-dressed cartoony girls – presumably Sara, Becky and Ermengarde in the attic. All the grime, grit, and worry hygienically disposed of and replaced with cute. Because that’s what a princess is. I think we need a few more ‘solemn’ drawings of children, please. For me, Margery Gill’s drawings will always epitomize A Little Princess.