On the very last day of this year’s Oxford Lit Fest I was lucky enough to join Robin Stevens and Katherine Woodfine at The Story Museum to talk to our hearts’ content about detective fiction – writing it, and reading it.

We all write historical crime mysteries for children – and for anyone else who likes to read them! 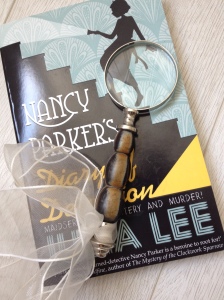 Katherine’s books are set in the rags and riches world of the grandest Victorian department store, Robin’s boarding school murder mysteries are set in the 1930s, and my new series is set in 1920, featuring Nancy Parker, a housemaid-turned-amateur detective.

Our top hero Wilkie Collins is credited with inventing the genre of detective fiction with Sergeant Cuff in The Moonstone (1868). His books have nail-biting mysteries and brilliant characterisation. In The Woman In White, the wonderful Marian Halcombe has the terrier-like qualities, essential for the amateur investigator, of loyally searching and refusing to let go. Marian is also a great antidote to the ‘ideal’ heroine of Victorian fiction who was as passive and dependent as she was pretty and blonde.

I have to confess that Clemency’s ghastly great-uncle in my first book, The Mysterious Misadventures of Clemency Wrigglesworth, owes  more than a little to Marian’s half-sister’s uncle, Frederick Fairlie. (Yes, complicated – they always are!) Also to the wonderful Ian Richardson who played him in the 1980s TV adaptation.

Conan Doyle’s Sherlock Holmes, the prototype of the investigator with almost super-human deductive skills. ‘We’re looking for a man with hare lip whose housekeeper always uses Shiny-Bee Floor wax.’ Ok, I made that up, but it’s just the kind of thing we expect Sherlock to say, and the way he’s morphed into a 21st century detective shows what a hold he has on our imaginations.

I read all the Miss Marple short stories, especially the early ones for 1920s atmosphere, when I was writing Nancy Parker. But my favourite book of Christie’s, Death Comes As The End, is one which many people haven’t heard of. It may be the first example of a historical crime novel. It’s set in the court of the Pharaohs in 2000 BC and has as high a body count as her famous And Then There Were None. Christie’s husband was an archaeologist and her interest in the subject inspired this fascinating whodunnit.

Harriet Vane from Dorothy L Sayers’s Lord Peter Wimsey books is another great female detective – and a novelist to boot.

As for children’s books which inspired us, Nancy Drew, E. Nesbit’s Bastable children for their problem-solving (in The Treasure Seekers), and even Just William (identified as a loose cannon), never forgetting Enid Blyton’s The Secret Seven, and The Famous Five (though really it was tomboy George and Timmy the dog who worked it all out).

Finally a massive vote from me for Golden Age writer of mystery fiction, Josephine Tey, whose books are still eminently readable today.

The Daughter of Time (1951) is an odd hybrid of contemporary and historical investigation: a police inspector, who prides himself on reading innocence or guilt in a suspect’s face, is laid up with a broken leg and bored. Sparked by a portrait of Richard III, he investigates from his hospital bed the story of the murder of the Princes in the Tower, using written sources. This book was voted number one in The Top 100 Crime Novels of All Time list by the UK Crime Writers’ Association in 1990. I wonder if it’s the predecessor of all those novels where a modern-day hero/ine uncovers a story through a cache of letters and documents from the past?

My own favourite books of Tey’s are Brat Farrar, a beguiling mystery of identity, The Franchise Affair (rather modern in its portrayal of press manipulation, and full of twists and turns) and Miss Pym Disposes, which is set in a girls’ boarding school!

Katherine Woodfine (left), me and Robin Stevens at The Story Museum, Oxford.

So if you want a classic detective fiction reading list, this is not a bad place to start.

3 thoughts on “What do crime writers read?”

What do you think? Cancel reply